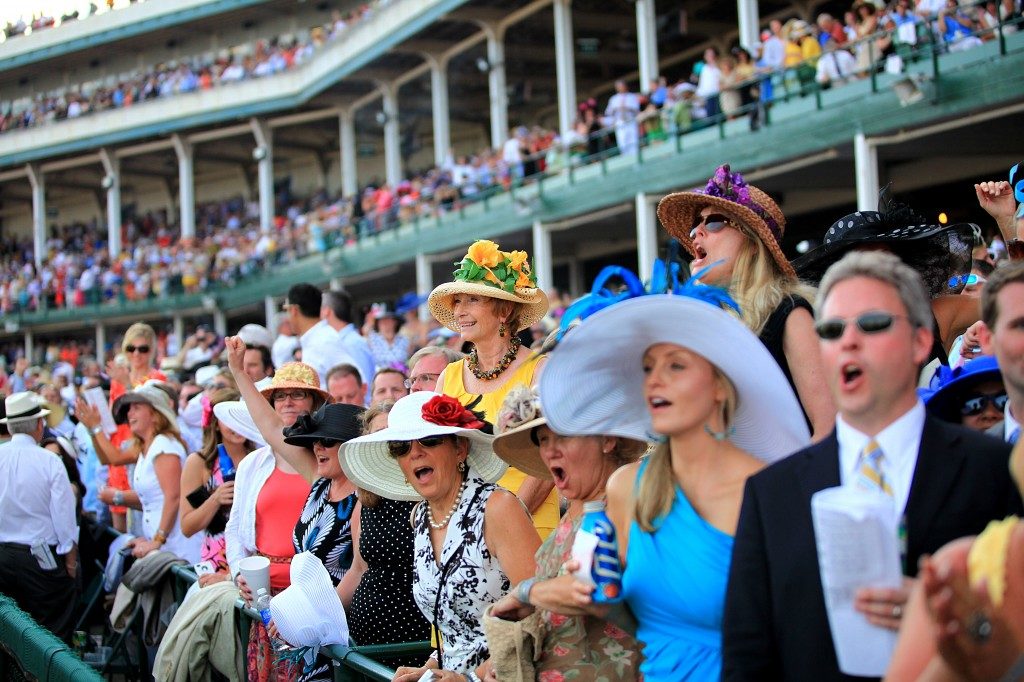 The Kentucky Derby has been nicknamed “the greatest two minutes in sports.” Here in 2018, we are celebrating its 144th year, but how did we get here? When did it start?

I’m sure everyone knows what The Kentucky Derby is! The Derby is a horse race that is held annually in Louisville, Kentucky on the first Saturday in May, capping (another word) the two-week-long Kentucky Derby Festival, but it wasn’t always this way.

In 1872, Col. Meriwether Lewis Clark, Jr., who was the grandson of William Clark from the Lewis and Clark expedition, traveled to England. There he visited Epsom in Surry, which is where The Derby had been running annually since 1780. Clark then traveled to Paris, France, where in 1863, a group of racing enthusiasts had formed the French Jockey Club. This was a traditional gentlemen’s club and is still regarded as one of the most prestigious private clubs in Paris. It’s best remembered as an elite gathering of French society from the nineteenth century. In addition to the French Jockey Club, they organized the Grand Prix de Paris at Longchamp, which was the greatest race in France at that time.

Clark returned home to Kentucky, and then organized the Louisville Jockey Club. His sole purpose was to raise money to build quality racing facilities outside of the city. The track that we know and love would soon be known as Churchill Downs. Churchill Downs was named for John and Henry Churchill, who were the ones that provided land for the racetrack. In 1937, the racetrack was officially incorporated as Churchill Downs.

The first Kentucky Derby was held on May 17, 1875. There were a crowd of 10,000 people who watched 15 three-year-old Thoroughbred horses race for 1.5 miles (or 12 furlongs). This was the same distance as the Epsom Derby. A three-year-old Thoroughbred named Aristides won the race in just over two minutes and 37 seconds. His jockey was Oliver Lewis (that name sound familiar, Lexingtonians?) who was only 19 years old. Aristides’ trainer was Ansel Williamson. Aristides took a second-place finish in the Belmont Stakes later that year. By1896, it was changed to a mile and quarter (10 furlongs), which is the same length it remains to this day.

Despite the initial success of the Kentucky Derby and Churchill Downs, by 1894 the track ran into financial difficulties. This led to the Louisville Jockey Club being incorporated that same year. Despite this, the business continued to flounder until 1902, when the Derby would find its salvation in a man named Col. Matt Winn. A skilled marketer, Col. Matt Winn was able to put together a syndicate of businessmen to purchase the facility and within his first year of ownership, was turning a profit. Under Winn, Churchill Downs and the Kentucky Derby became the preeminent race track, and race, in North America. Winn was soon recognized for his success and accomplishments, being recognized as an official Kentucky Colonel, forever being known as Col. Matt Winn.

Traditions of the Kentucky Derby:

There are a large number of traditions that are associated with The Kentucky Derby, such as the Mint Julep. The Mint Julep consists of bourbon, mint, simple syrup, and is the traditional drink of choice for the race. This quintessential Kentucky drink is served in a silver Julep cup. Burgoo is also served at the Derby. It’s a popular dish that is a thick stew consisting of beef, chicken, pork, and vegetables.

While attending the race is the greatest tradition of all, how you do it is up to you. The infield is general admission and it’s likely you won’t see much of the race. This is where the majority of people come to party! However, “Millionaire’s Row” lives up to its name. It refers to the expensive box seats. This is where you’ll see celebrities and well known people in society.

Of course, you can’t mention Derby tradition without mentioning the large, elaborate hats, or fascinators, worn by the women in attendance.  In fact, 90% of female attendees were a hat, and the cost of a high-end Derby hat is $500 to $1000. It’s labor extensive, and usually takes 1 to 7 days to make from start to finish.

Each year, over the two-day period which includes the Kentucky Oaks and the Kentucky Derby, 120,000 Mint Juleps are served at Churchill Downs Racetrack. What does that take to pull off? It requires more than 10,000 bottles of Old Forester Mint Julep Ready-to-Serve Cocktail, 60,000 pounds of ice, and 1,000 pounds of freshly harvested mint.

If a ready-to-serve cocktail doesn’t do it for you, how about the $1000 Mint Julep? Since 2006, Churchill Downs has also served extra-premium custom-made mint juleps at a cost of $1000 each at the Kentucky Derby. These mint juleps were served in gold-plated cups with silver straws, and were made from Woodford Reserve bourbon, mint imported from Ireland, spring water ice cubes from the Bavarian Alps, and sugar from Australia. The proceeds were used to support charitable causes dedicated to retired race horses.

10 Interesting Facts About the Kentucky Derby:

The Kentucky Derby trophy is made of 14 karat gold and stands on a jade base. It’s 22 inches tall and weighs 3.5 pounds.

The garland is made up of more than 400 red roses that are sewn onto green satin. It weighs more than 40 pounds. In the center of the garland is a rose “crown,” with a single rose pointing up that symbolizes the heart and struggle needed to reach the Kentucky Derby Winner’s Circle. The number of roses in the crown are determined by how many horses compete in the Derby. They believe that the tradition may have originated in 1883, when New York socialite E. Berry Wall presented roses to ladies at a post-Derby party that was attended by Churchill Downs founder and president, Col. M. Lewis Clark. This gesture is believed to have led Clark to the idea of making the rose the race’s official flower. However, it was not until 1896 that any recorded account referred to roses being draped on the Derby winner, when Ben Brush, the winner of the 22nd Derby, was given a garland that was made of white and pink roses. Later, in 1904, the red rose became the official flower of the Kentucky Derby. Then in 1925, sports columnist Bill Corum coined the term, “Run For the Roses.”

Length of the Track:

The historic 1¼-mile race was originally 1½ miles before the current distance was established in 1896.

Ever since 1931, The Kentucky Derby has been held on the first Saturday, instead of an undetermined date in mid-May. The move was largely due to the popularity of the idea of a Triple Crown winner, and allowed for a consistent racing schedule for horses that would participate in all three races – The Kentucky Derby, followed by the Preakness Stakes, and then the Belmont Stakes.

There hasn’t been a Derby that has ever been postponed because of rain or bad weather.

In 2017, a crowd of 158,070 watched Always Dreaming win the Derby, making it the seventh biggest attendance in the history of the racetrack. The largest attendance at the Kentucky Derby was in 2015, when over 170,000 people watched from the grandstand. That’s in addition to the millions of people who watched on TV. Sixteen million viewers saw the 143rd Run for the Roses on TV.

The Kentucky Derby set a record for wagering with over $187 million bets on the horse races in 2012. According to Churchill Downs data, the total was estimated to be $165 million in 2011. This is the combined total from on and off-track bets, both. Since Kentucky Derby is the biggest race in the world, millions of people from around the world bet at various live tracks and online sports books.

Who’s the fastest horse in the history of the Derby? It probably won’t surprise you to know is was Secretariat. In 1973, Secretariat broke Northern Dancer’s record from 1964, by running the Derby in 1:59:4. Not only is this record still standing today, but Secretariat went on set even faster times, in each of his Triple Crown races.

The Kentucky Derby is the first race in horse racing’s coveted Triple Crown, which also includes the Preakness Stakes and the Belmont Stakes. The Preakness and the Belmont Stakes took hiatuses in 1891-1893 and 1911-1912, but the Kentucky Derby has been ran every year consecutively since 1875. To win the Triple Crown, a horse must win all three races, a feat only accomplished by twelve horses.

The Derby By Numbers:

Want to Watch the Derby on TV?

The Kentucky Derby post time is scheduled for 6:34 p.m. ET, but the actual race isn’t set to start until 6:46 p.m. Again, better to tune in early, than late, since the race only lasts two minutes. You don’t want to miss it!

Check out what other Bluegrass bloggers have to offer this Kentucky Derby season!

Where to Celebrate the Derby in Lexington / Lex Eats

Oaks & Derby Looks from Amazon / Munchkins and the Military

How to Throw the Best Derby Party / The Bliss Between

How to Dress for the Derby / Styled in Blue

Which horse are you betting on? 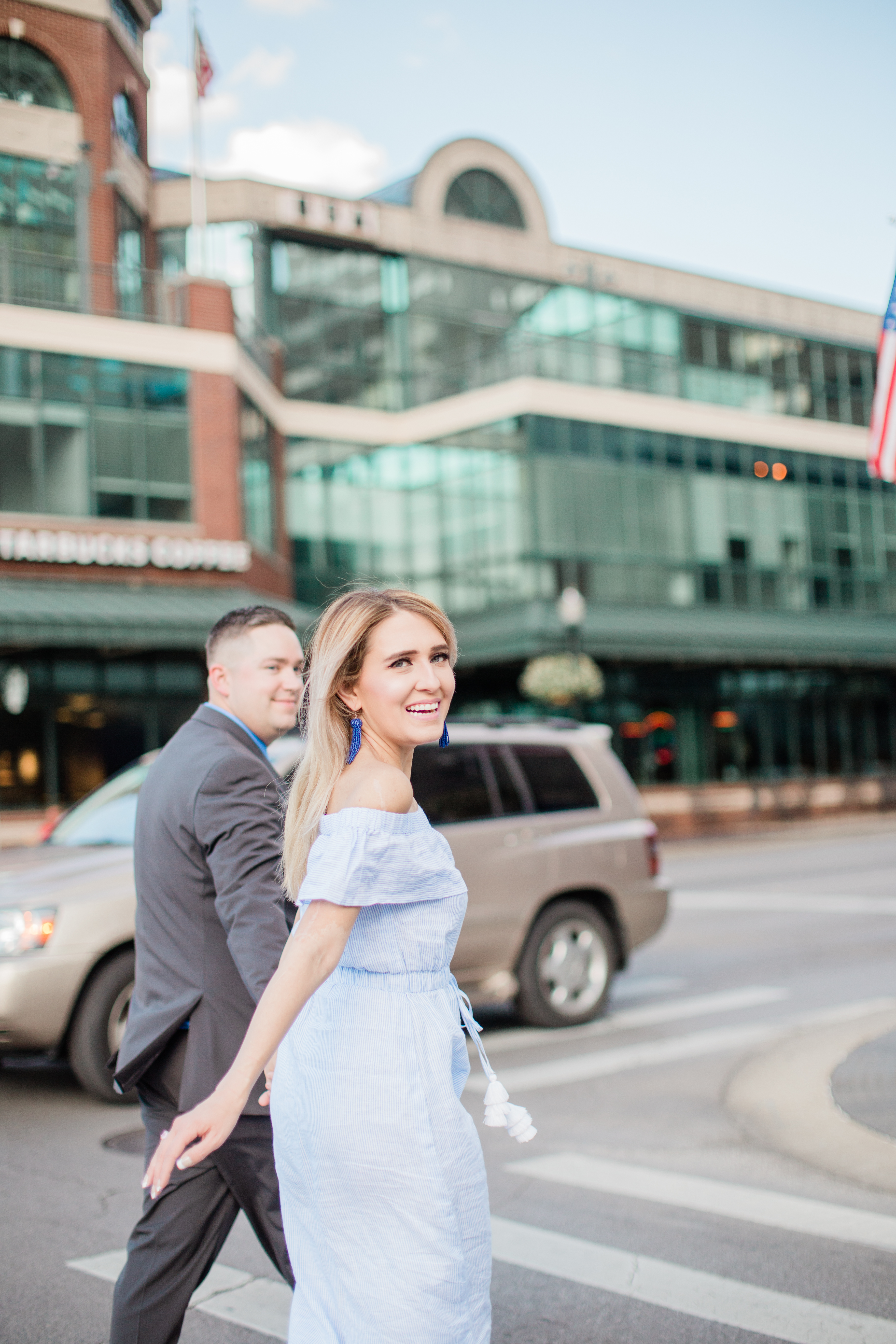 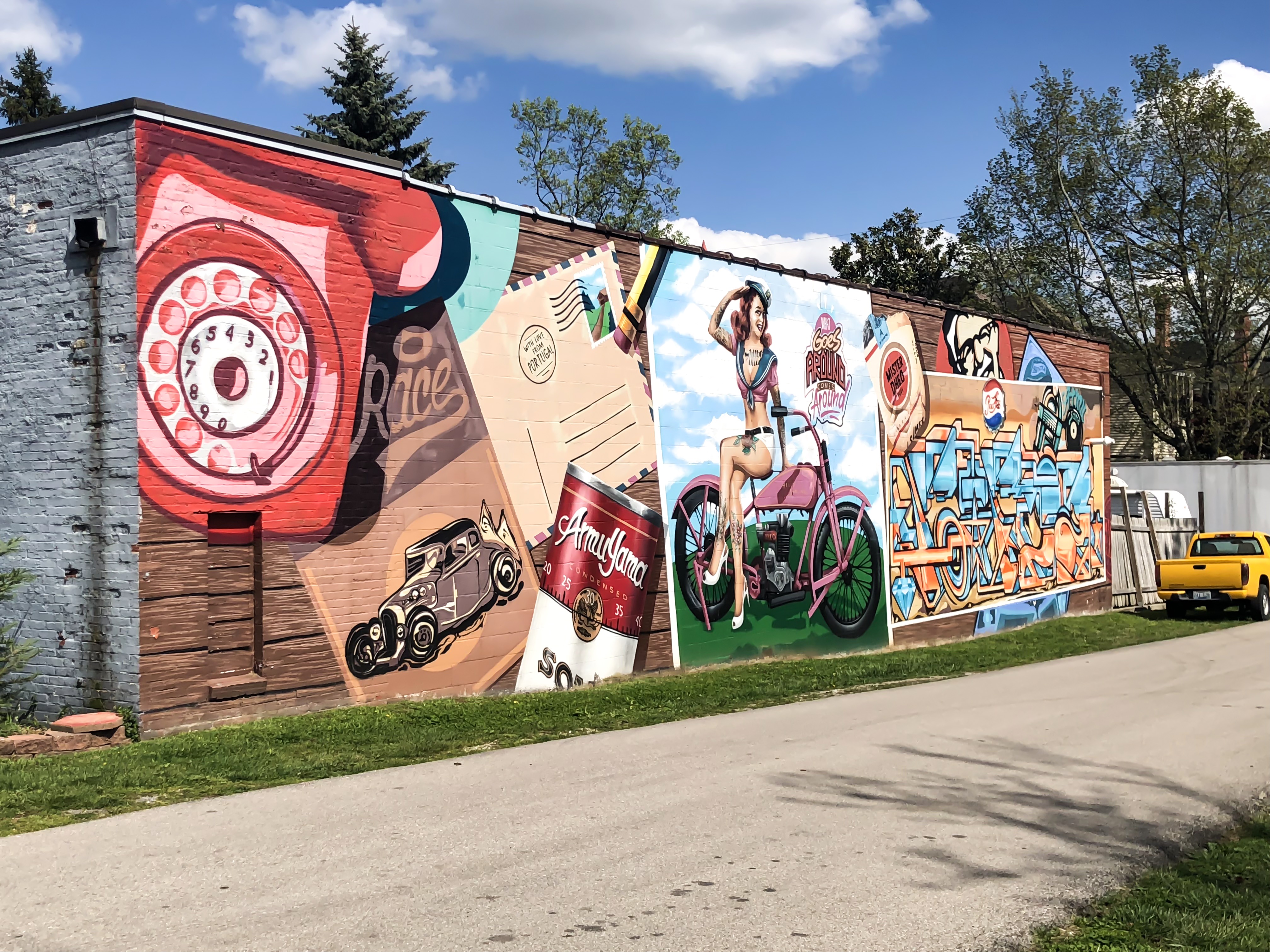 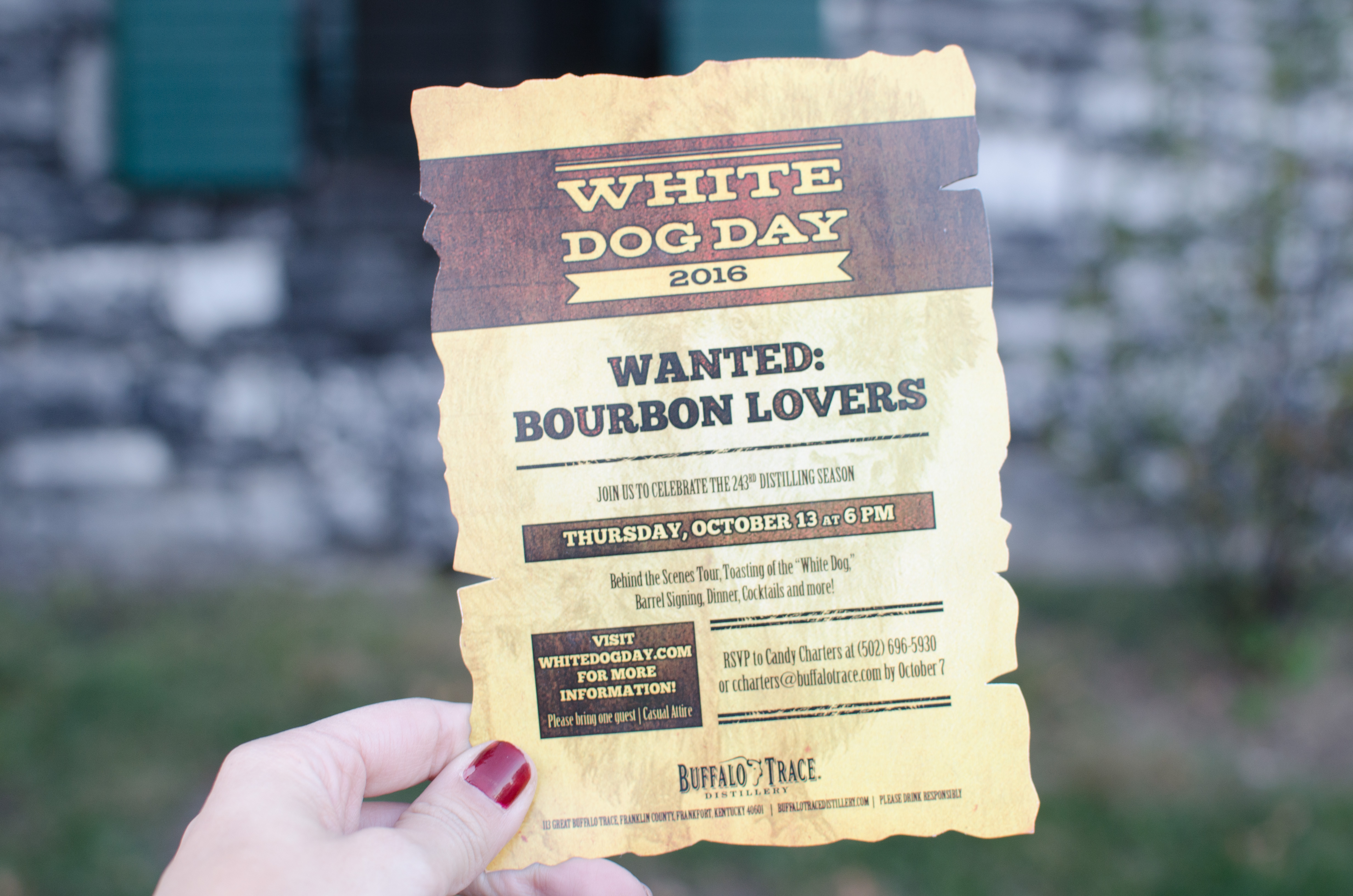