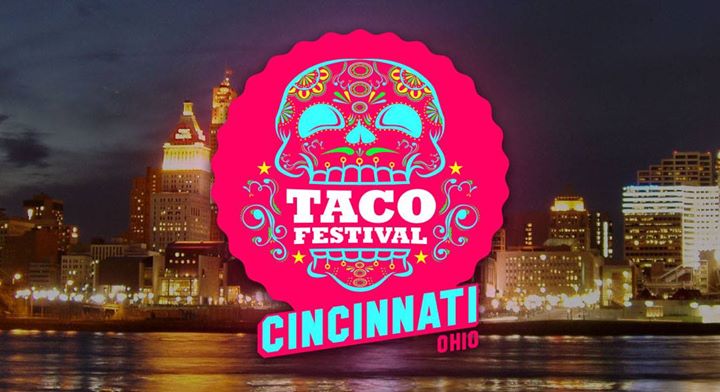 This post is in collaboration with the The Taco Festival. All of these opinions are entirely my own. Thank you for supporting brands and businesses that support Fabulous in Fayette!

Last weekend, Fabulous in Fayette was driving up I-75 from Lexington, Kentucky to Cincinnati, Ohio to attend the Taco Festival. An hour after hitting the road, I was in Cincinnati and ready to nom on all of the tacos. Who doesn’t love tacos?!? I’m a huge foodie, so I love going to food festivals, because of the food (um, hello?!) and it’s a great opportunity to support local businesses. 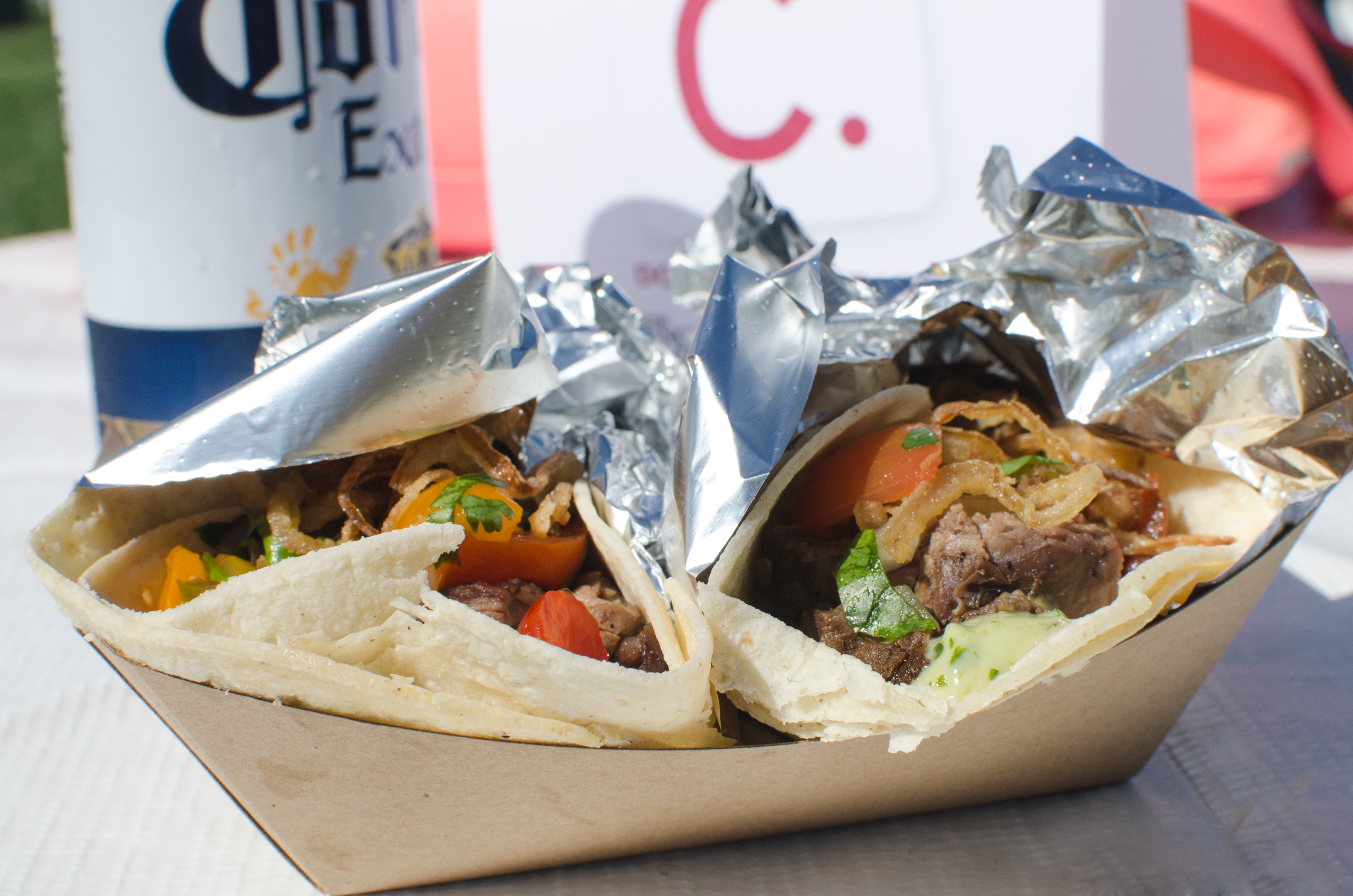 My husband may have been even more excited than me, because he loves any chance to eat Mexican food.

We arrived around 4:30pm at Yeatman’s Cove, which was 30 minutes after it officially started. Parking was easy to find (signs for event parking everywhere!). We only had to pay $5, and it was even closer than the parking that was $10. Score! We stood in line maybe fifteen minutes to get our wristbands. Once inside, we entered taco utopia. We immediately headed to the first taco stand, which was Black Sheep Burritos and Brews. Both of us considered this to be our favorite out of all of the ones that we tried! 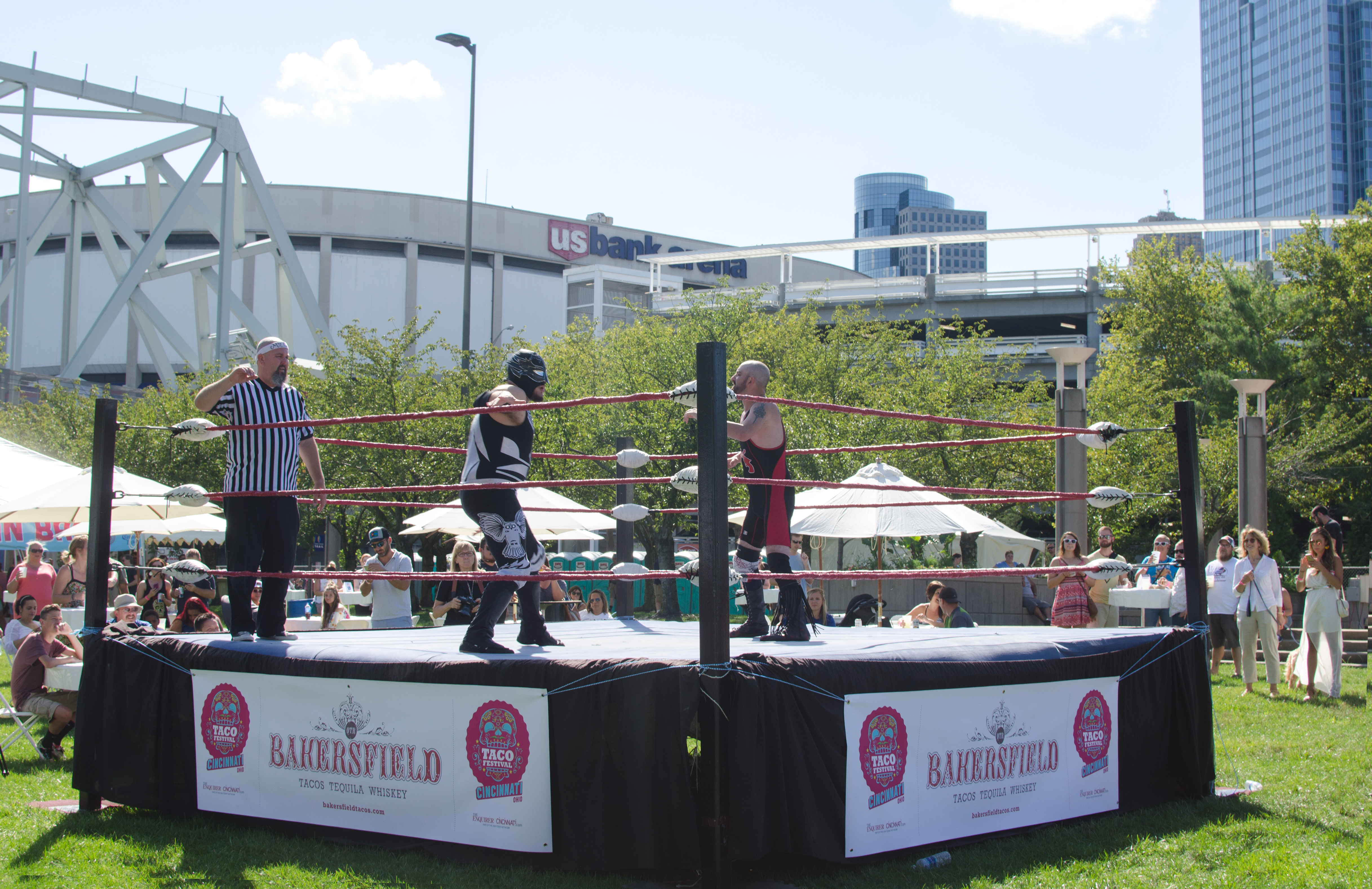 During the Taco Festival, there were several matches between Lucha Libre wrestlers. This is a term used for professional wrestling in Mexico. This type of wrestling is characterized by colorful masks, high-flying maneuvers, and rapid sequences of holds and manuevers.

In addition to the wrestling, there were live performances by Elementree Livity Project and Southern Saviour. 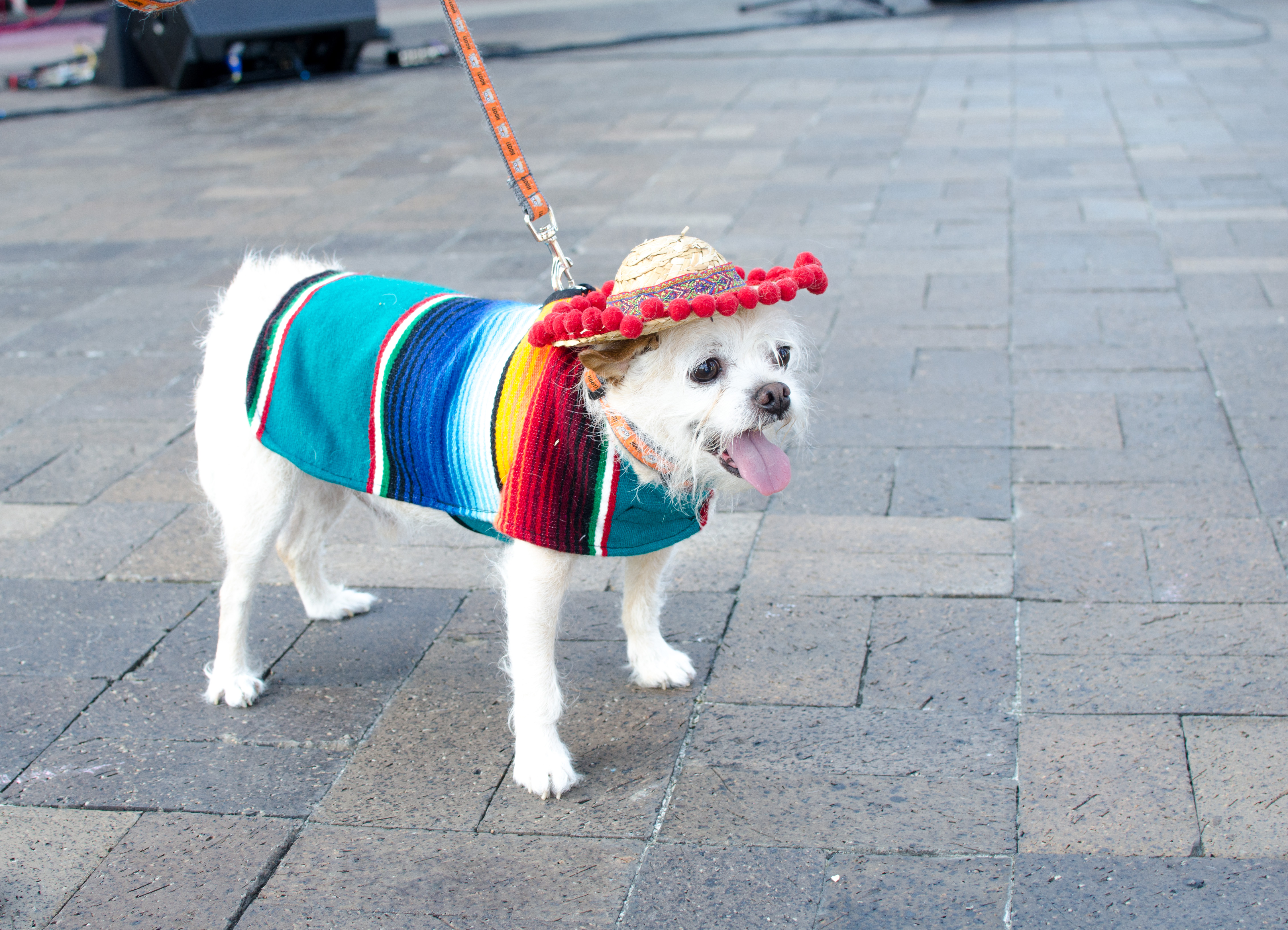 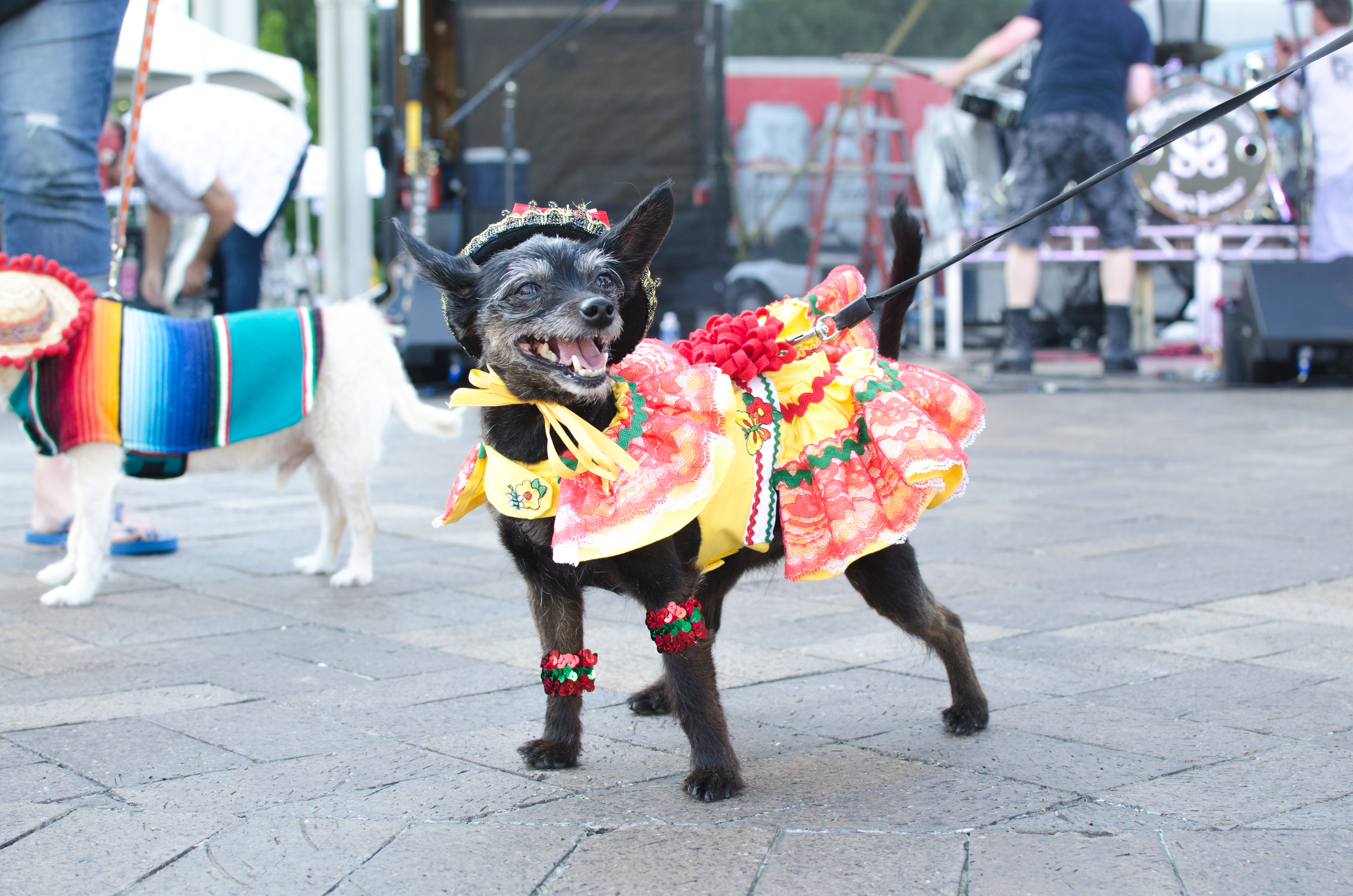 You couldn’t have a taco festival without a chihuahua beauty pageant. I would be the worst judge ever, because I would demand cuddles from all of them and declare them all winners! 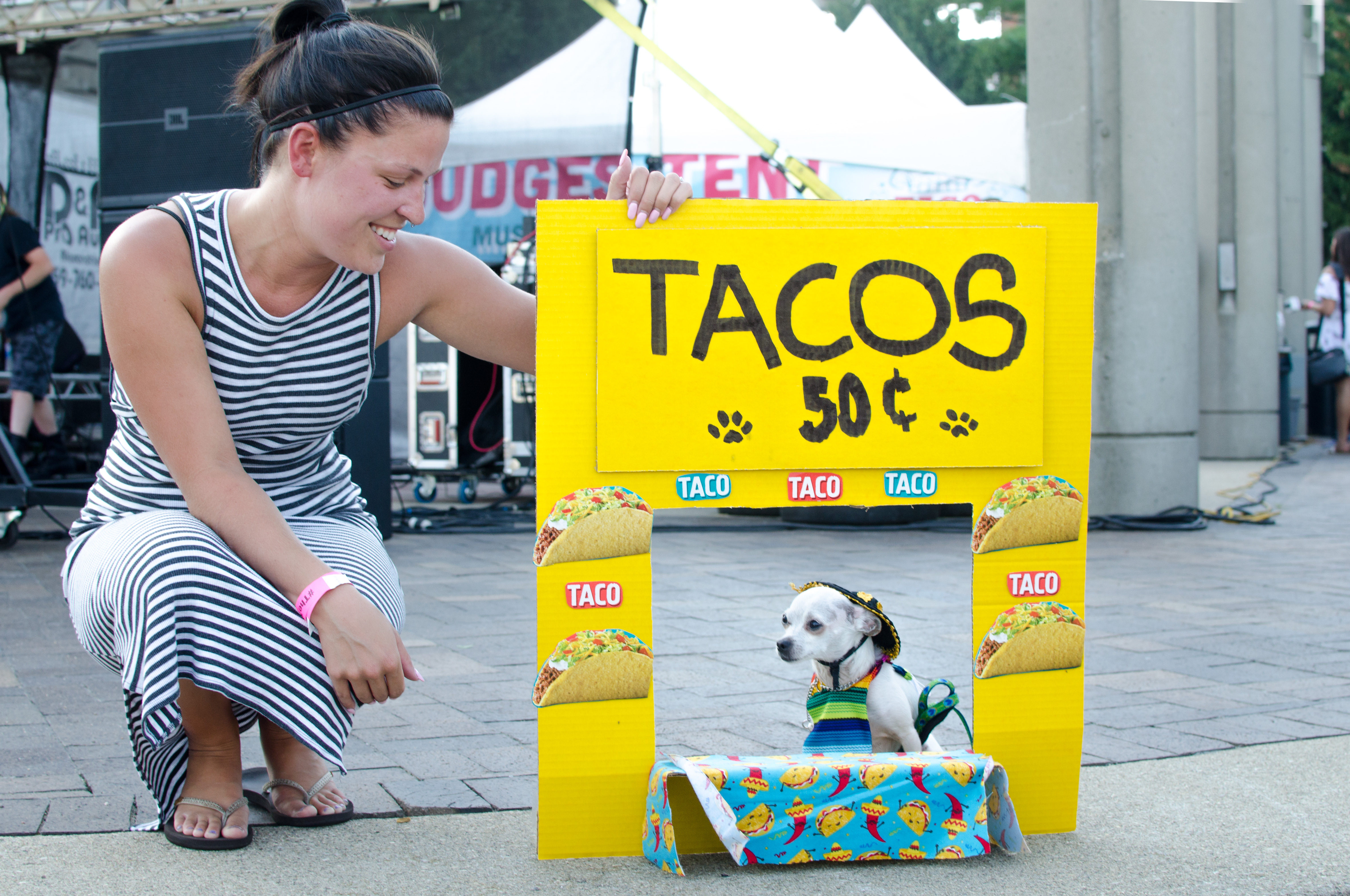 Runners-up in the pageant were Mr. Bojangles, owned by Susannah Maynard of Montgomery; and first runner-up 11-year-old Olivia, owned by Katie Scholten of Hyde Park. The winner was a 5-year-old rescue named Enkei, owned by Adele Stephen from Milford. Enkei’s costume included a taco stand. 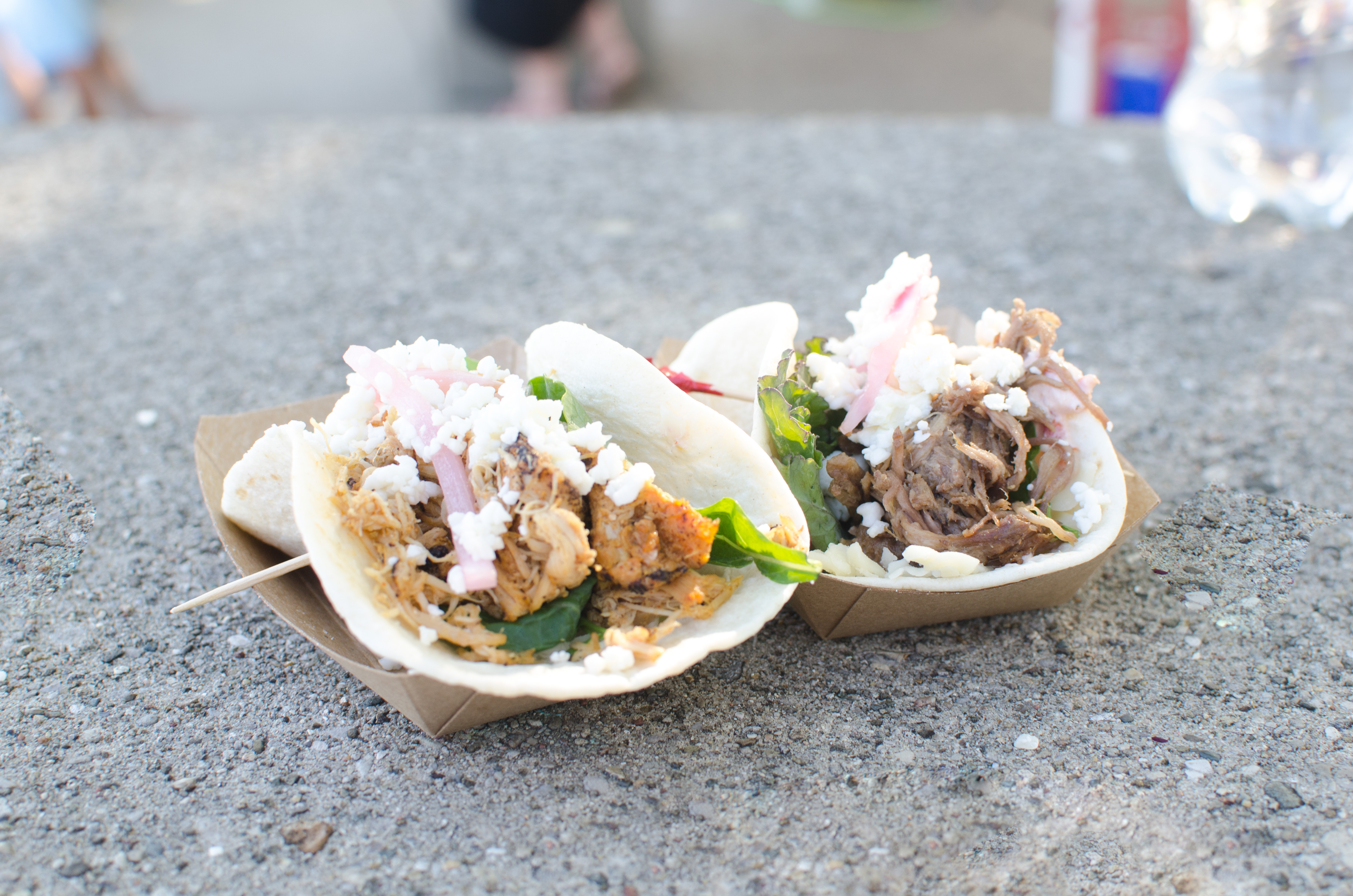 Now, back to the tacos…

These tacos were from Jekyll. We got one pork and one chicken topped with mixed greens, three cheese blend of feta + queso fresco + queso rino, sundried tomato, sour cream, and pickled onion. 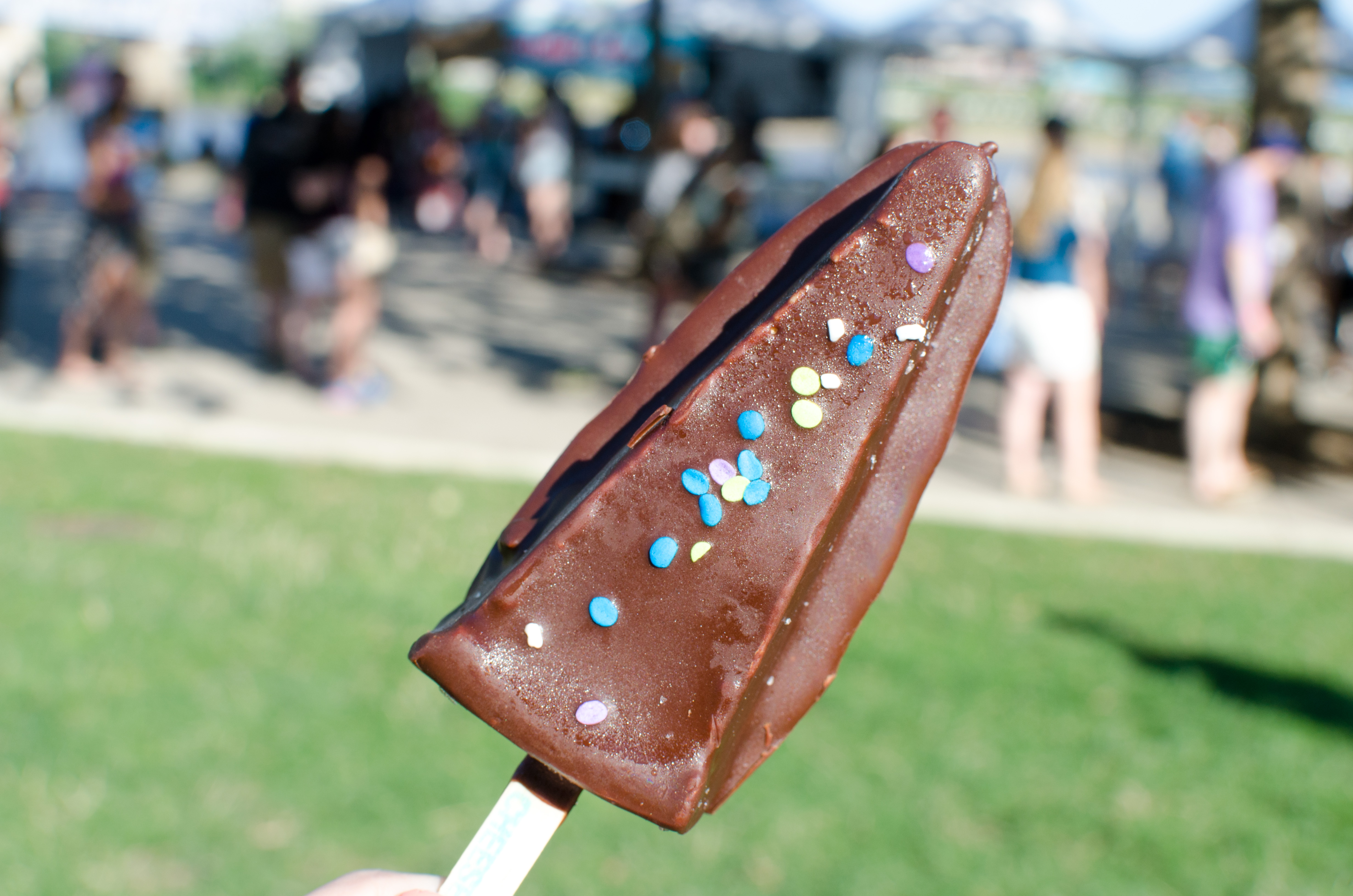 While standing in line, I decided to get some cheesecake on a stick! This tasty treat was from Mickey’s CheeseSicles. It’s a small batch premium frozen piece of cheesecake dipped in chocolate and other coatings. It tasted heavenly on a hot summer day! 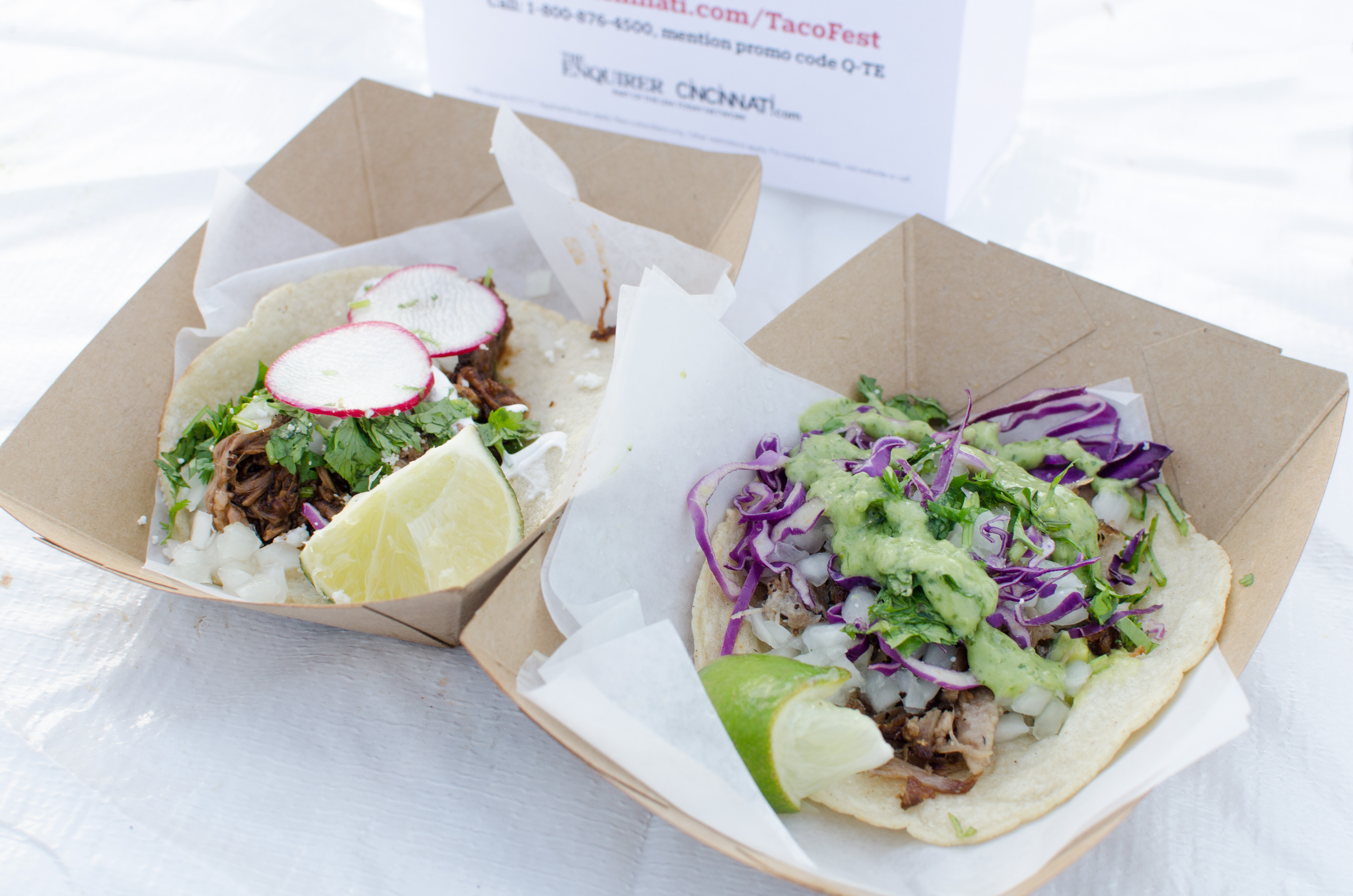 These tacos were from Bakersfield OTR. 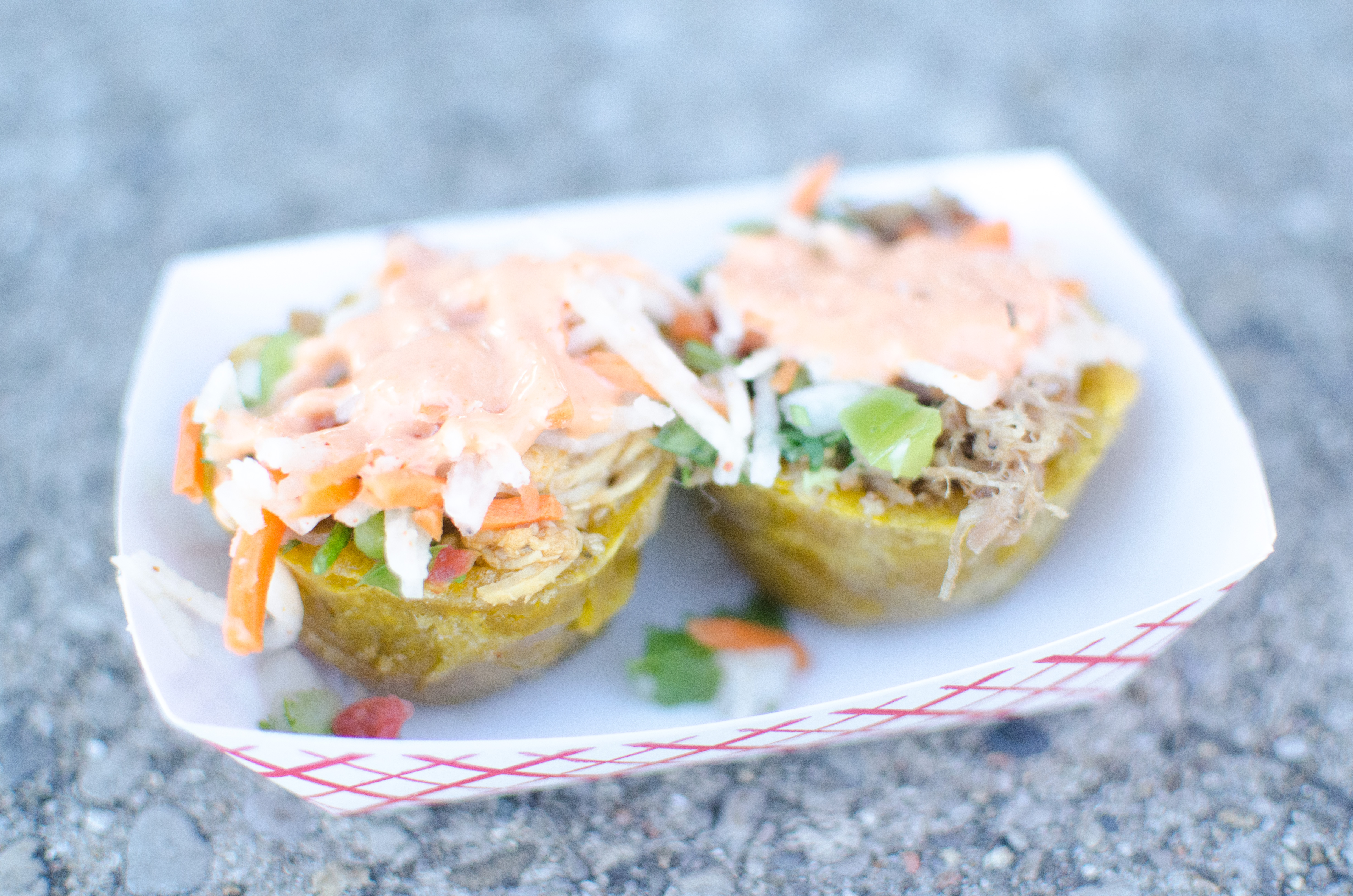 The tacos pictured above are from Mashed Roots. Instead of a traditional tortilla, they used a fried plantain “bowl.” 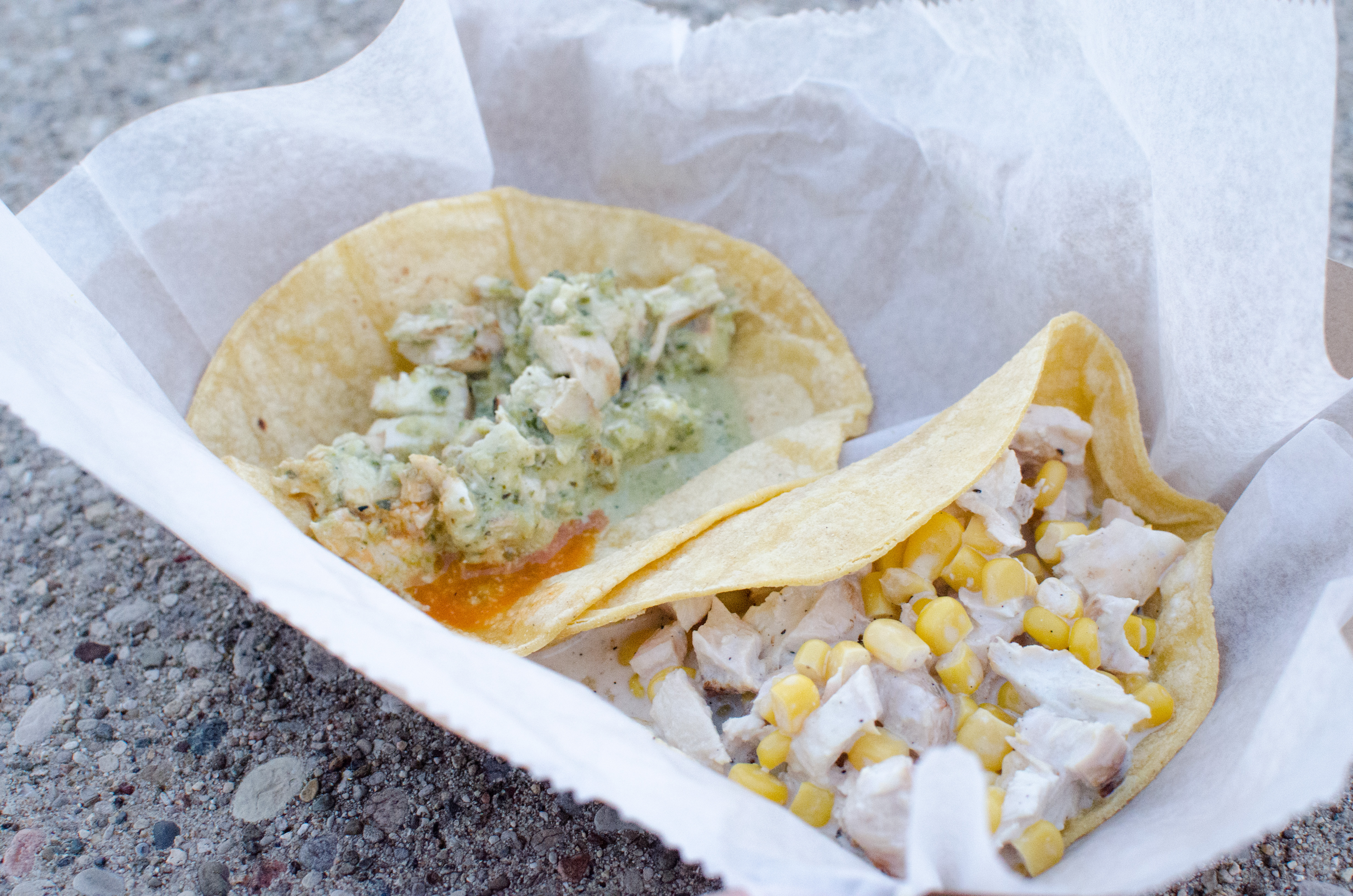 These two tacos are from Taqueria El Barullo 251.

Both are chicken. One is with cream and corn, and the other with poblano cream. 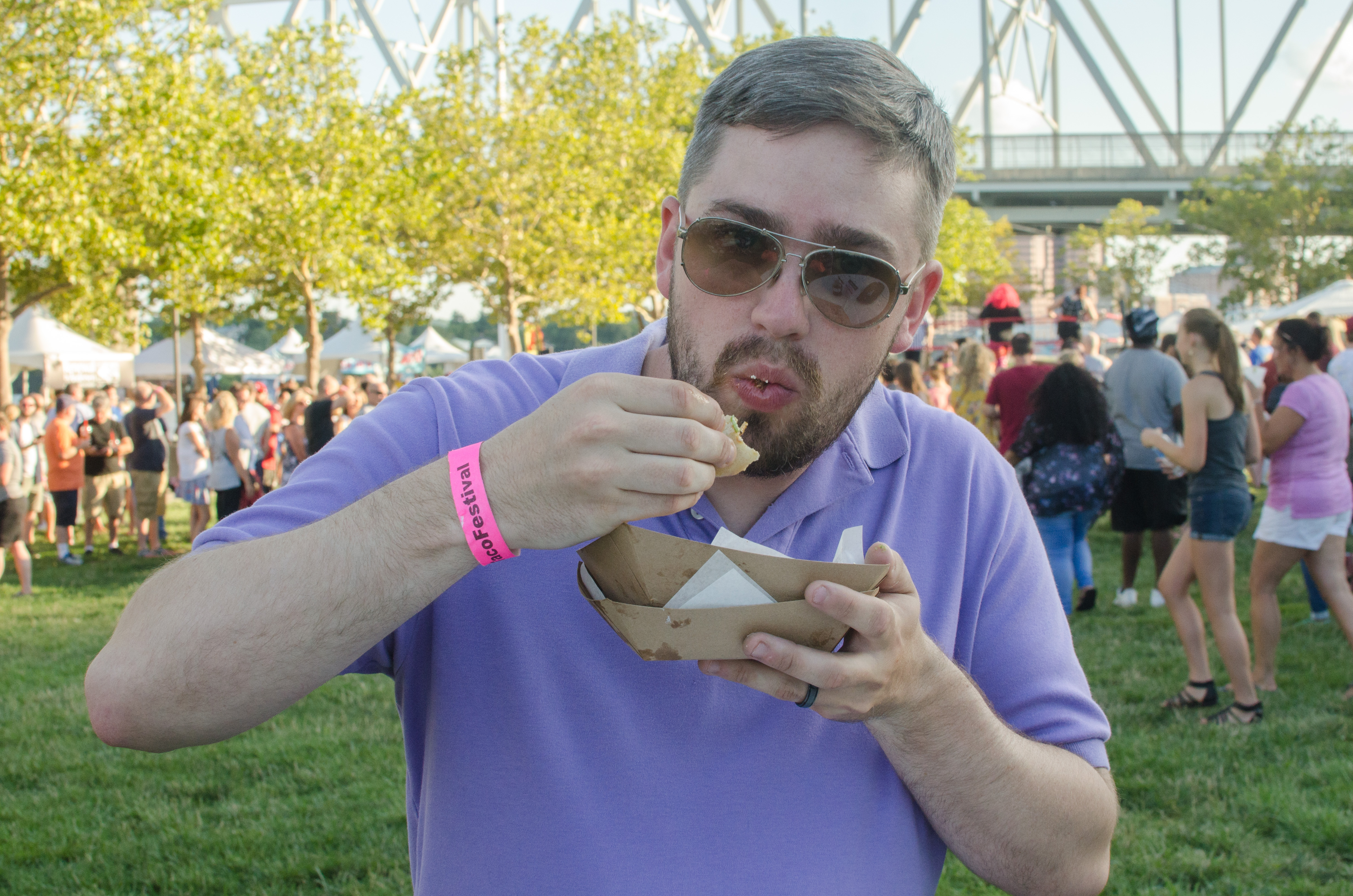 When did the Taco Festival begin?

The festival humbly began on a dirt lot in the heart of downtown Scottsdale in 2009 and has since moved to an eight-acre grass field at the Spring Training home of the Arizona Diamondbacks (This year is the 8th Annual Arizona Taco Festival). This festival is also believed to be the world’s first taco festival and is the only one sanctioned by the National Taco Association. In Arizona, it has grown to two days, and now includes more tacos than you could imagine! In 2016, they sold over 500,000 tacos. The Taco Festival partnered with Gannett Media and USA Today and is hitting the road for a ten city tour!

Taco Festival 2017 is coming to a city near you! 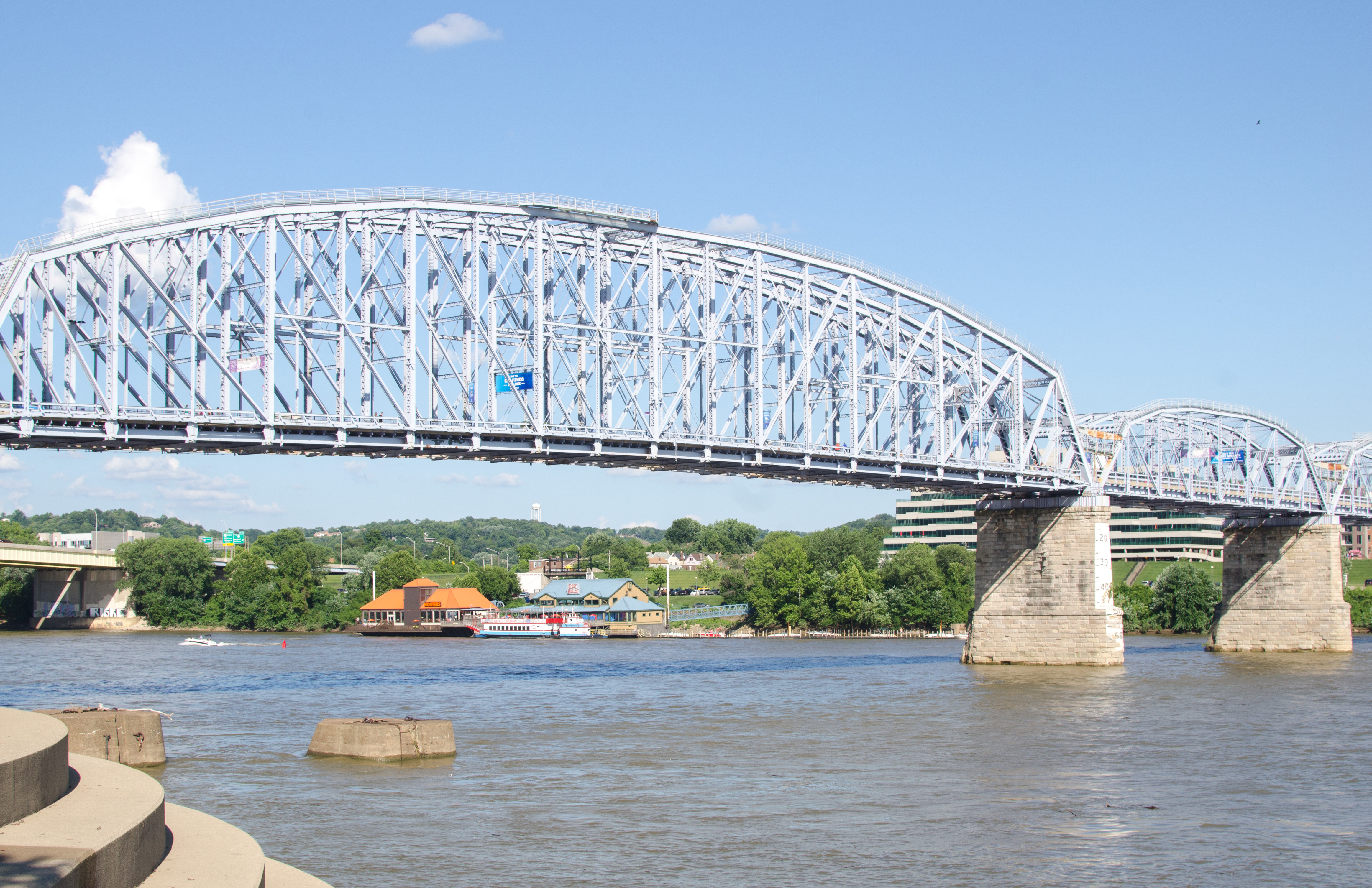 I had never been to Yeatman’s Cove before, and thought how it was such a cool place to go for a walk or even a date. 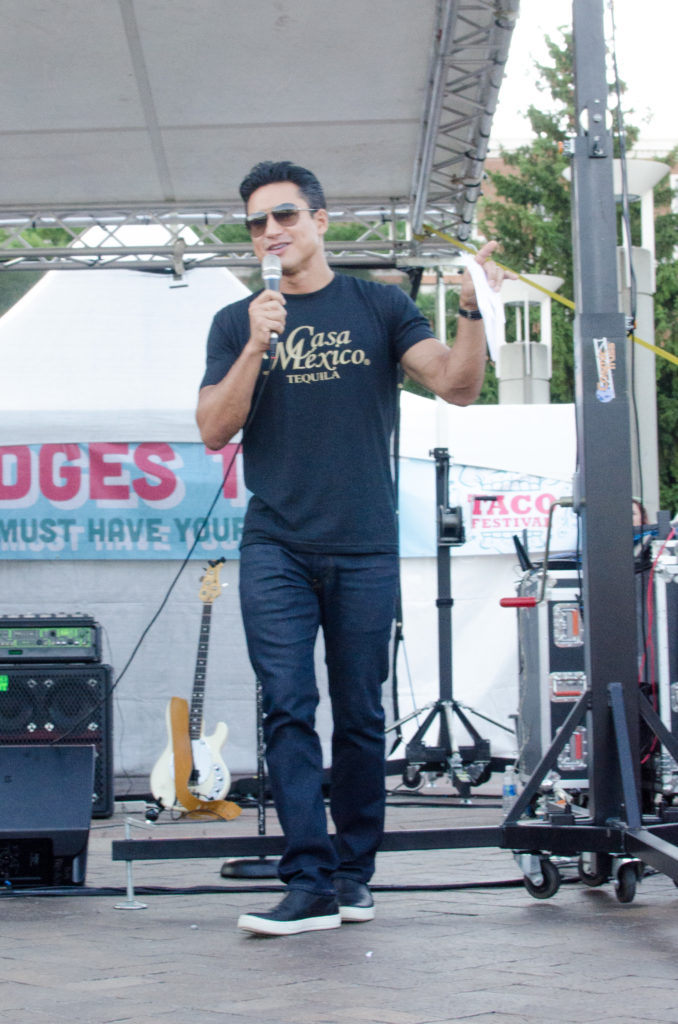 It’s none other than Mario Lopez aka A.C. Slater from Saved by the Bell! He was the spokesperson for the Taco Festival! He even stepped up at one point and helped make some tacos when the lines were getting long. 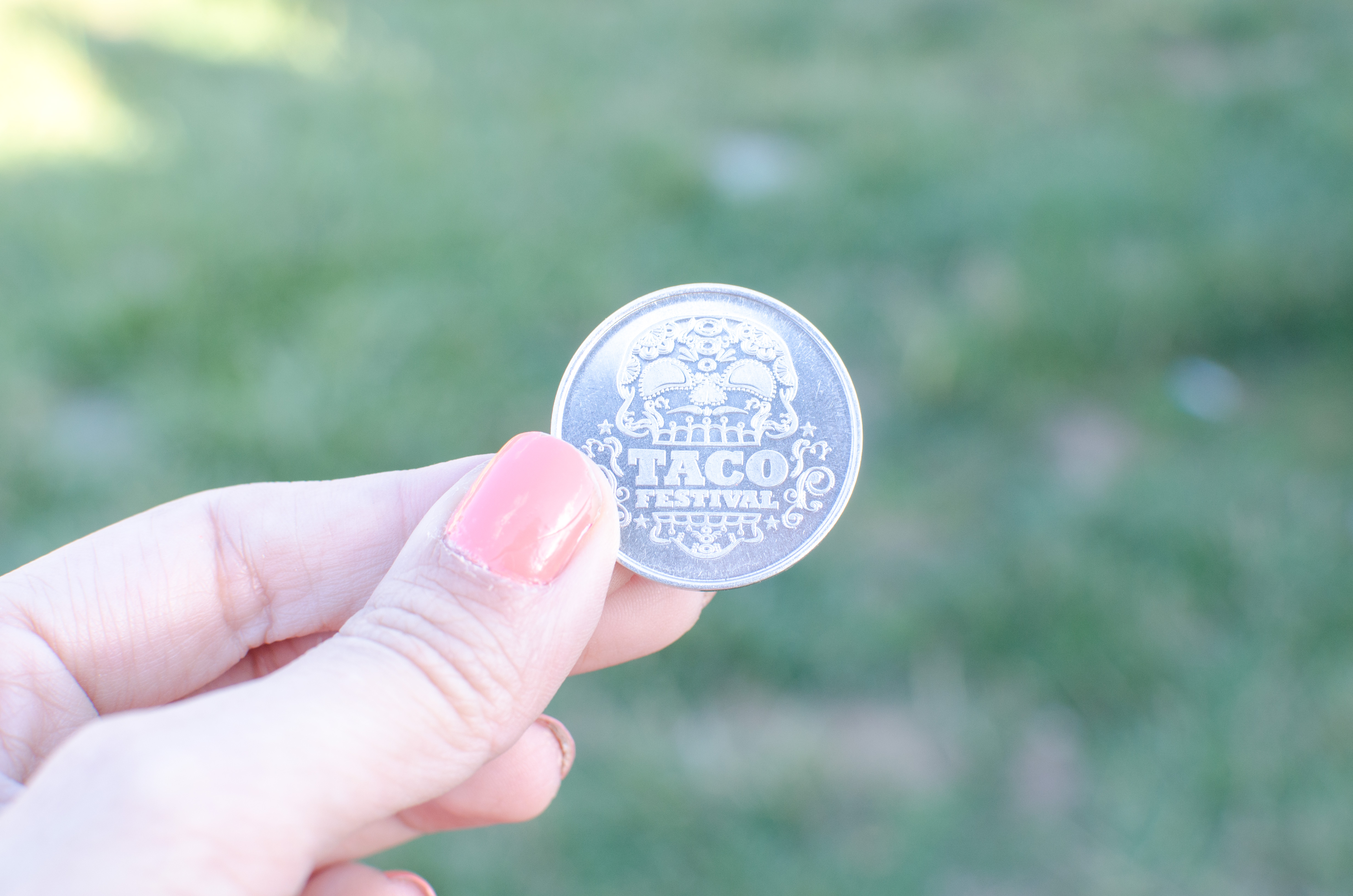 Taco Festival Cincinnati Recap – Was it worth it?

The lines were long, but I knew that going into it, so it wasn’t all that surprising to me. The lines might have been a wee little bit longer than I wanted, but I’m sure when they come back next year with more vendors, the lines will be much shorter. Vendors ran out of food towards the end of the night, which again wasn’t surprising to me (I got to try five tacos, so I’m not complaining. Plus, I knew that it would have been impossible to try them all). I’ve been to several food festivals, where this happened. Honestly, I couldn’t imagine the type of planning on the restaurant’s part that goes into an event of that magnitude. I always tell people who plan on going to a food festival, food event, or anything remotely similar to get there early. It definitely makes such a difference!

The only thing I would have liked to see, would have been a menu that featured all the restaurants and the tacos they were serving that day. That would have made it easier to plan out what lines were worth the wait, instead of taking a gamble by picking a line to stand in.

At the Taco Festival Cincinnati, there were 5,456 attendees and approximately 23,000 tacos served (that’s an average of 4.2 tacos per person). That’s a whole lot of tacos! We each tried five and could’ve tried more, but we would get our tacos, sit down and eat and walk around. Imagine how many we could’ve ate if we would’ve got in one line, and then immediately in another line!

I know a lot of people are upset and had a vastly different experience than I had. I can’t speak for them, because I only can speak for myself. There’s a lot I can say on the matter, but I’ll just say this: I had a good time. It was great to experience a new type of food festival and be introduced to local businesses that I didn’t know existed (since I don’t live in Ohio). Everyone knows that I am a huge supporter of local businesses in Lexington and Kentucky, and Ohio isn’t any different (I’ll support local businesses anywhere). This festival is definitely one that I will go back to in 2018!

Tips for Attending The Taco Festival:

See you next time, Cincinnati!

YOUR TURN: Do you like going to food festivals? If so, any cool ones coming up where you live? 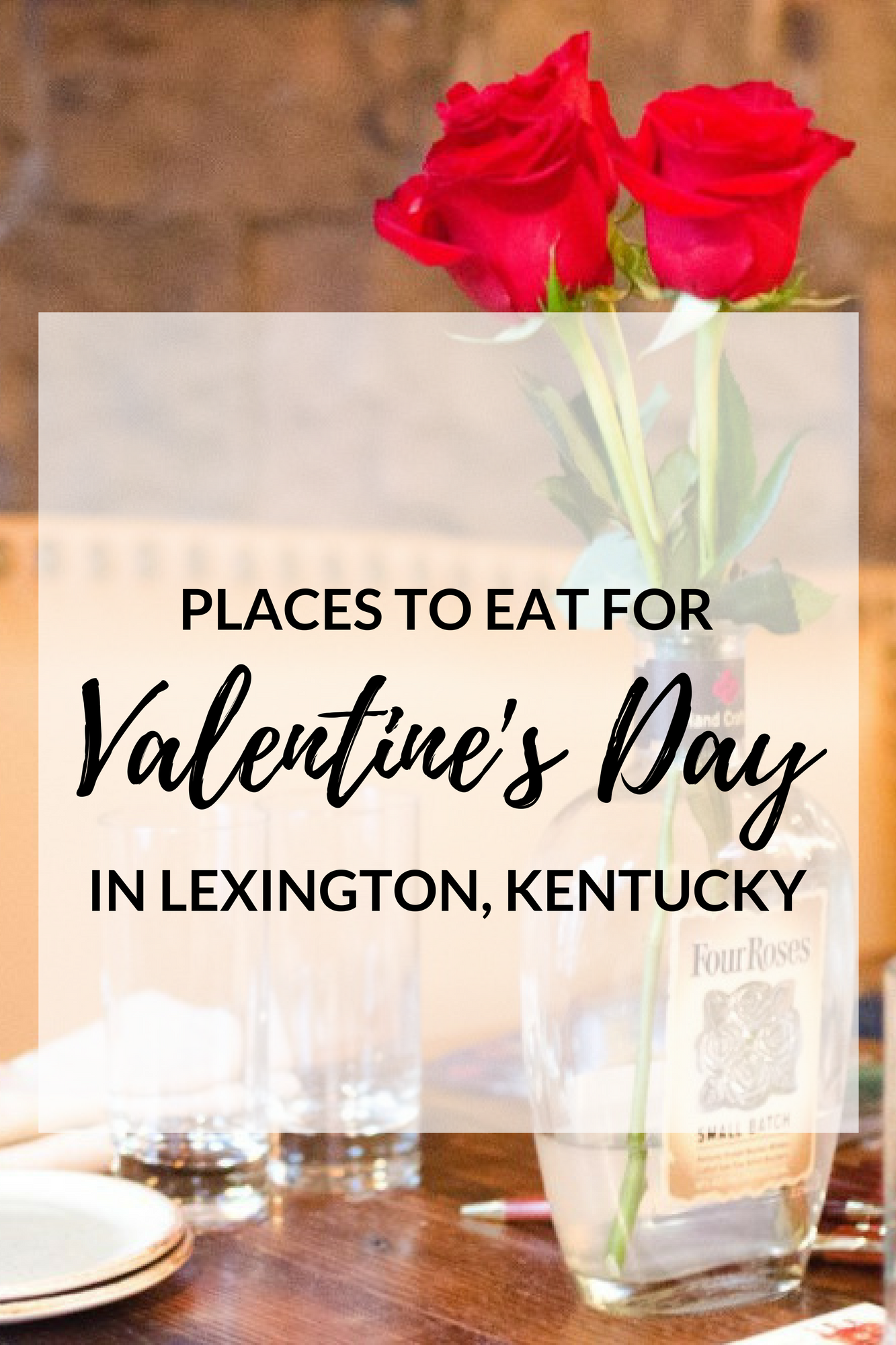 Places To Eat For Valentine’s Day in Lexington, Kentucky 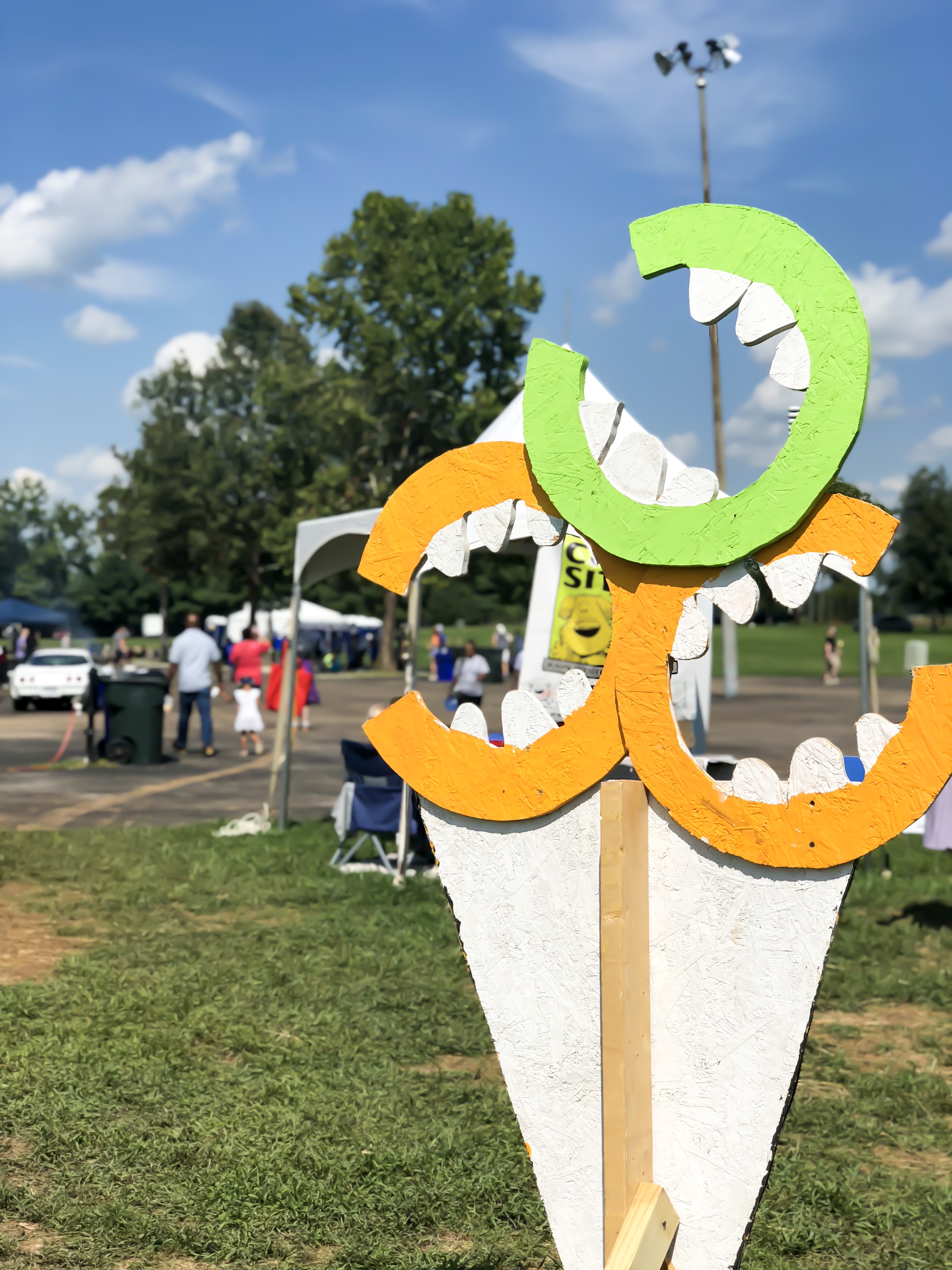 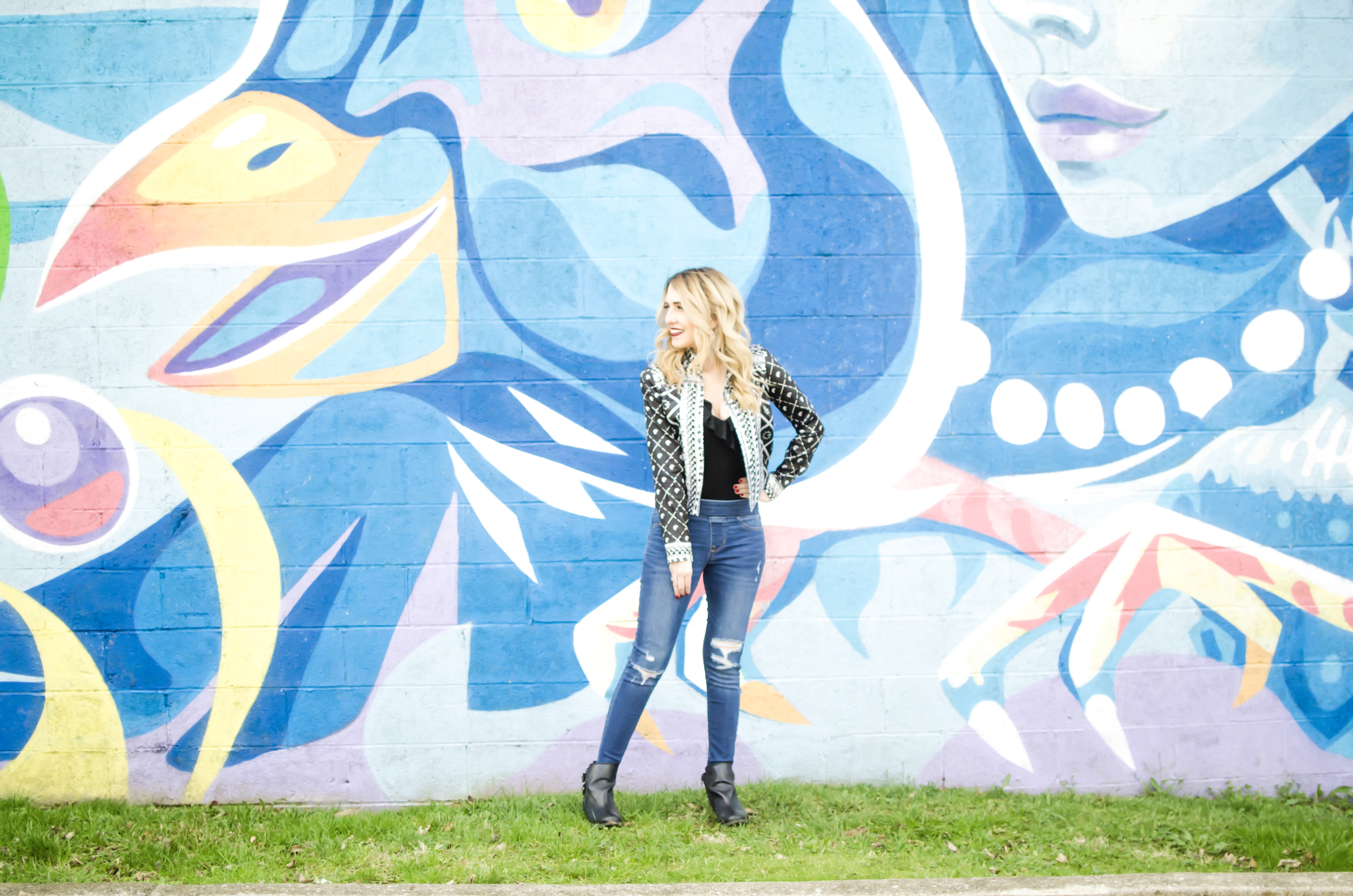